Blogging has become a career now in India. People who are unemployed and also those who want to showcase their talent are joining the blogging industry. But there is always remains a question in mind of bloggers that ” What will be the scope of blogging in India in future “.

Scope of blogging in India

So in this post, I will tell you according to my experience that what will be the scope of blogging.

I am listing below some points that show you the scope of bogging in India is fantastic.

This post is written in 2018. so according to the present situation, people are less aware of the field of blogging. People in India are involved in searching on google. but not in writing.

Because of the lack of awareness among them.

Some people also believe in the myth that there is no earning in blogging.

Some percentage of people have left blogging, because of the lack of interest or they not have enough patience in them.

However, you also can’t ignore the fact that during the year 2018, Indian bloggers have increased in many numbers of times. Then the year before.

Due to the youtube videos, people are learning to blog and a huge force has occupied the field of blogging.

But still, the number is very less as compared to the people who search on the internet from India it is very very large.

But we can still get quick success in blogging in India if we work smartly. Just focus on the topic where people are not doing well in ” SEO ” or writing. It is clear that there are a huge scope and opportunity for blogging in India. Because the number of customers is increasing multiple times and you have to just open a store for them.

People in India who search on google are in high percentage. And very fewer people who have knowledge of any topic or field are getting success in blogging in India.

People only have traditional education which they get from schools or college.

But they do not opt for any specific skill regarding course.

That’s why there are very fewer people who have some advance knowledge in any field and they are making huge and huge amounts of money.

I support my above argument due to the fact that very fewer people have knowledge of core programming language. And many of them are busy in the corporate world. They do not prefer to work for themselves.

So it’ is a high chance to come at the top for one who has knowledge of the core of anything.

In 2019 and 2020 there is an estimation that the traffic will increase by five times than earlier. So if one wants to make content and make money then it’s high time to start blogging.

Due to the JIO company, the rates for data usage became very less in India.

Earlier it was very costly to use the 4G data plan on smartphones. But JIO company reduced the plan rates in the market after demonetization in India.

And now everyone is using a 4G  data plan and searching their needs on Google.

And JIO is reaching in every village and areas which were untouched earlier by the Internet. Millions and millions of internet users in India is yet to come.

So if you are a blogger and have an idea to start blogging in India. then thumbs up

In every keyword which mostly reached developed and wealthy countries like the USA , UK and other such there is too much competition. Everyone is trying to rank for the keyword on which other millions are millions of keywords that have no competition at all. Even you will be amazed to know that these keywords have no articles related to them too, which means that the keyword is just waiting for the blogger to came and rank it in the google search engine.

There is too much opportunity in affiliate marketing too because people are developing intent in themselves to buy a product online by sealing reviews, and there are millions of products which are not reviewed properly and even not had a good  SEO too , so if anyone wanted to review and make money with affiliate marketing then Indian is the best market . 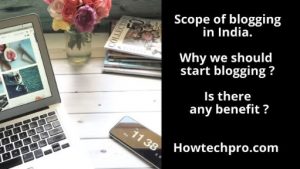 Scope of blogging in India

This is the ultimate point to justify the scope of blogging in India.

In Indian Regional language like Hindi, Bhojpuri, Gujrati, Malayalam, etc., there is a huge scope of making money. The amazing fact which we should learn here is that India consists of hundreds of regional languages in major and there exist thousands in minor.

So there is a huge opportunity to make lots and lots of money by blogging in regional languages. People are searching in their language and they are getting nothing in search results and Google will rank anything now, in those languages because there is no one to compete.

There exist millions of people in each regional language, and if anyone learns and starts blogging in that than it will be a win-win situation for them.

I have a bonus tip for you.

If you want to rank your website in any regional language, then you need not learn that specific language. You can hire freelancers from fiverr.com , freelancer.com   or upwork.com  and make your work very easy.

Indian is also filled with people who are emotional. And it can be also one of the aspects to get hit in blogging or affiliate marketing. If you are manipulating in terms of emotions and feelings than believe me India is a right place to make lots and lots of money.

For example, people here invest or you can say spend a huge amount of money on their health or looks. Like if you can manipulate someone and make them believe that your product is related to their personality and it can be proved fruitful for them than 60% of people will definitely buy your product.

India is rich in terms of different cultures and a huge number of festivals. Every month Indians celebrate at least one big festival. In which people buy products from the physical market or order from Amazon.

Like in Diwali people do lots of Google reaching for gifts for decoration and for outfit women show more interest in the festival then men. And they do lots of searching and shopping.

These festivals for bloggers and affiliate marketers too. because festivals are a huge chance to make lakes of money per day. If you work on your target audience here by doing micro – niche blogging idea or method then you can take away all the money possible at that time period.

And believe me at every festival, there are over millions of people involved in online searching and purchasing. Festivals are also a never-ending thing in India . and even more and more people are getting aware of Internet of every day. So it is a great opportunity and scope of blogging in India.

In the end, I want to conclude that there is a huge and huge scope of blogging in India It is better to say that blogging is just born in India now. It has a huge chance of growth of blogging if anyone wanted to do blogging in India and wanted to make millions than it’s high time to start blogging now because traffic is increasing in huge percentage every month. And it will prove to be a win-win situation for everyone.

4 thoughts on “Scope of blogging in India”

Iconic One Theme | Powered by Wordpress